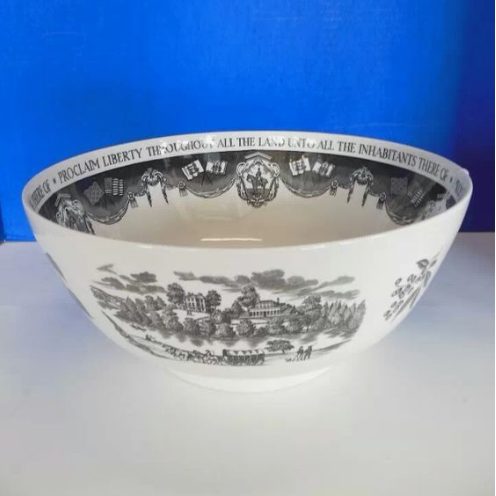 There are several Best in Show Trophies offered by the Montgomery County Kennel Club.  This beautiful bowl is one of them.

The bowl was given in memory of Mr. and Mrs. G. Harrison Frazier, Jr. by the MCKC.  It is a Wedgewood masterpiece made in 1959 exclusively for Bailey, Banks, and Biddle and has become a highly desired collector’s item.  It is stunning and we are thrilled to receive it.

From the Wedgewood museum, here is a description of the bowl

This bowl, called the Philadelphia Bowl, is in the form of a Chinese export punch bowl, a shape Wedgwood copied in the 18th century. This bowl was manufactured by Wedgwood in 1959, exclusively for The Bailey Banks & Biddle Co the Philadelphia jewellery store. Decorations to this bowls exterior were designed by Alan Price of the Wedgwood Design Studios, based on prints from the collection of the Pennsylvania Historical Society, depicting four scenes from 18th century Philadelphia which was once the capital of the United States: Christ Church, the centre of worship (from a painting by William Strickland); The Merchant’s Exchange, the centre of business (from a lithograph by August Kolener); The State House or Independence Hall, the seat of government (from an illustration in the Columbian magazine of January 1790) and Lemon Hill, a typical Philadelphian upper class home (from a painting by John Woodside). In between these scenes are examples of the trees Philadelphia’s east-west streets are named after: Chestnut, Walnut, Mulberry (now Arch), and Locust. The interior of the bowl is decorated with a scene of the signing of the Articles of Confederation. The interior rim of the bowl has a border of flags, including the city and colony flags, and the original flag of the united colonies. Also within this border are four portraits of soldiers. Above this border is the inscription, “Proclaim liberty throughout the land unto all the inhabitants there of.” This motto was cast round the Liberty Bell which was rung at the time of the signing of the Declaration of Independence. It is taken from Leviticus 25:10. Decorations applied using lithograph technology. Body of this bowl is made from Queens ware with a clear glaze applied to interior and exterior.

Bred with Care. Raised with Love. Sprinkled with Stardust.